Gift that Changed the Direction of a Life

Previous Next
Gift that Changed the Direction of a Life

Early in life, possibly as early as kindergarten, our son received a gift of a CD from his grandfather that would change his life. The CD contained classical music, a departure from the gospel and old gold rock and roll preferred by my wife and me. We were surprised by and pleased with the gift of the CD, but never could have imagined its long-term effect on our son.

From the day he received that CD our son developed a love for classical music.  Our world became filled with operas, classical concerts and many other forms of music performed in a variety of settings that previously would have never crossed our musical path.

Three years ago this July our family said “see you later” to his Grandfather, the one who had given him that CD. Grandfather’s career included service as a Navy Chaplain where he held the rank of Lieutenant Commander.  The Navy sent an honor guard to play taps and present the United States’ flag that covered the casket to my mother-in-law.  We learned, however, that the bugler planned to hold a trumpet to his mouth and use a canned recording of taps.

Our classical-musically trained son stepped up and instead, beautifully played taps live in remembrance of his Grandfather.  It went further than that.  He embraced a strong belief that all military veterans should have live taps played at their memorial service or place of burial.  So strongly driven was he by this experience – and other factors – he enlisted in the U.S. Army Reserve Band. This followed just after his first year of work on a Doctorate in Music.

Some say that little things can mean a lot but in our son’s case, it is more.  Two “little things” came to affect our son in ways his Mom and I could never have imagined.  Little things often mean everything.

Recently, by the way, I’ve learned that the U.S. Army is the number one employer of musicians in the world.

As we celebrate the birthday of our nation, take a moment to listen to Army Specialist Olson singing an opera selection accompanied by the 208th U.S. Army Band during a concert that occurred during this past Memorial Day weekend. Think about a Grandfather’s loving gift that changed a young boy’s life so that he might bless others with his love of music and of America. 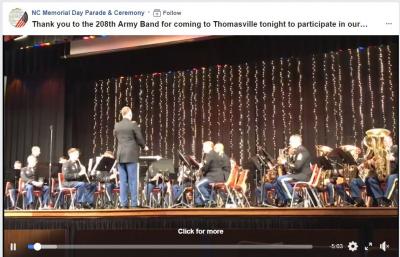 Thank you to the 208th Army Band for coming to Thomasville tonight to participate in our Memorial Day events. They gave a great concert! We enjoyed marching band music, opera, jazz, and so much more! They are a very talented band!